I recently had the opportunity to intern in the UC Davis Plant Science department in Dr. Gail Taylor’s lab for three months over the summer.  As a Career Exploration Fellow with the AI Institute for Next Generation Food Systems, I had a wonderful experience collaborating with students and researchers from undergraduate to Ph.D. levels.

I graduated high school in June of this year, with an interest in attending UC Davis and earning a degree in Plant Biology. This summer fellowship provided the opportunity to explore my interest in plant biology in preparation for my college studies. TaylorLab researches several aspects of sustainable agriculture. Researchers are currently experimenting with small-scale watercress vertical farming, in which watercress seedlings are cultivated in soil-stocked walls rather than in traditional horizontal plots. Several scientists are also studying the development of poplar trees as a wood biofuel that could one day substitute for coal and fossil fuels as a carbon-negative sustainable resource. Finally, graduate and postgraduate students are currently running experiments in DNA and RNA extraction from various soil and seed samples. 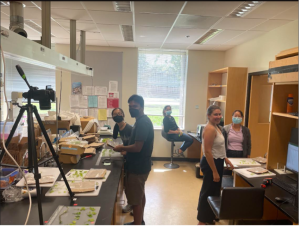 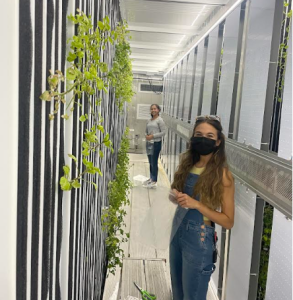 My experience at TaylorLab was a comprehensive and diverse introduction to the basic elements of lab research. Working under the supervision of graduate student Yufei Qian and assistant specialist Jack Bailey-Bale, I contributed to several experiments in the lab.

One of my favorite jobs was assisting Ms. Qian with an experiment in vertical farming of watercress. I was able to work with her throughout the experiment, from preparation to harvesting to sample processing. First, I prepared sample bags and logged the locations and genotypes of the samples that were to be collected. Then, I spent several days harvesting the plants with Ms. Qian and the other interns. Finally, everyone in the lab worked together to process the samples, which included weighing samples, recording reflectance, dissecting the plants, recording mainstem length and diameter, quantifying leaves, branches, and leaflets, and photographing the dissected samples. Later, oven-dried watercress samples also had to be weighed and logged. The process took place over several weeks. It was a privilege to be able to work on an experiment in several separate phases and see how work put in at the beginning of the process paid off in the end. 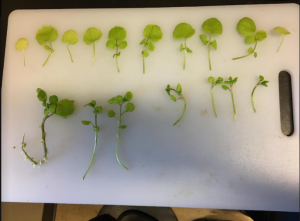 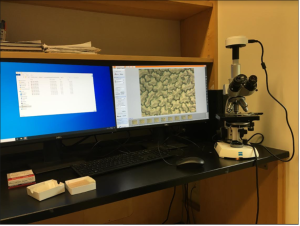 Another of my most enjoyable tasks was taking soil moisture measurements in the field with Mr. Jack Bailey-Bale. The overall goal of his research is to develop poplar trees into sustainable wood biofuel. High-density poplar wood chips could one day replace fossil fuels such as coal. Every two weeks, I was able to join him in an experimental poplar field and log measurements of soil moisture using a field laptop. I learned how to use several types of computer software and observed the data being taken in graph or spreadsheet form. I was fascinated to track the correlation between fluctuating soil moisture and the changes in graphs generated by the software.  This opportunity allowed me to learn about the importance of carbon negativity in fuel as well as to gain valuable experience working on-site in the field.

On days when there was less for me to do, I also had a set of routine, simple tasks that I could work on for hours on end. One of these was microscopy for Mr. Bailey-Bale, which involved taking pictures of stomata on the surface of lettuce leaves. Using microscope software, I could take clear, focused images of the stomata and pavement cells in the sample. This experience provided me with valuable microscopy skills. I also had a chance to work on watercress seed cleaning for Ms. Qian, a week-long process in which I used sieves to separate tiny watercress seeds from seed pods, petals, and debris that had been collected with them. I processed around four hundred of these samples while avoiding sample contamination, which helped me develop strong attention to detail. Finally, I worked on labeling for Mr. Bailey-Bale in preparation for a poplar sample harvest. While this wasn’t the most scientifically rigorous project, it did teach me that part of lab work consists of repetitive, non-technical tasks, which was important for me to learn as an aspiring lab researcher. 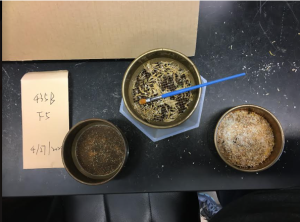 All in all, my experience at TaylorLab has been a positive one. In the past three months, I’ve learned so much about lab work, research techniques, field research, and much more. I’m very grateful to everyone involved in helping me with this internship and hope to repeat the experience soon.

I’d like to extend heartfelt thanks to everyone who has helped and guided me throughout this internship. Thank you very much to Gabe Youtsey, Hanna Bartram, and Aiwei Zhu, who worked to get me the position and set me up as an official AIFS fellow.

I’m also very grateful to Dr. Taylor, who was very kind and understanding despite my young age and lack of experience and was willing to give me a chance in her lab.

I truly appreciate all the assistance and teaching I received from Yufei Qian and Jack Bailey-Bale, who supervised me throughout the internship and always made an extra effort to make this internship meaningful and educational for me.